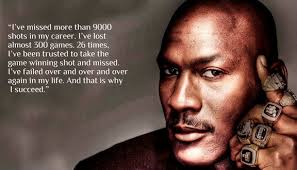 Growing up in the 90’s, I, like many others, was a huge fan of the Chicago Bulls, and Michael Jordan in particular. One of my biggest regrets is that I never got the chance to see him play in person. I always admired his ability to embrace the big moments and to put his whole team on his back if needed and lead them to victory. Obviously, with 6 championships in 8 years – a span that included his brief retirement to play baseball – the results speak for themselves.

How did he go from being cut from his high school varsity team to being the greatest basketball team on the planet? Clearly, he wasn’t simply born with a lot of talent. Any talent he exhibited on the court was largely earned through years and years of dedicated practice and time spent refining his craft.

Consider the following passage from Carol Dweck’s Mindset: The New Psychology of Success

“When Jordan was cut from his varsity team, he was devastated. His mother says, ‘I told him to go back and discipline himself.’ Boy, did he listen. He used to leave the house at 6 in the morning to go practice before school. At the University of North Carolina, he constantly worked on his weaknesses – his defensive game and his ball handling and shooting. The coach was taken aback by his willingness to work harder than anyone else. Once, after the team lost the last game of the season, Jordan went and practiced his shot for hours. He was preparing for the next year. Even at the height of his success and fame – after he had made himself into an athletic genius – his dogged practice remained legendary. Former Bulls assistant coach John Bach called him a ‘genius who wants to constantly upgrade his genius.’

“For Jordan, success stems from the mind. ‘The mental toughness and heart are a lot stronger than some of the physical advantages you might have. I’ve always said that and I’ve always believed that.” But other people don’t. They look at Michael Jordan and see the physical perfection that inevitably led to his greatness.”

As I have matured, I have grown to admire this day in and day out grit much more than his accomplishments and accolades. Day in and day out, he was consistently the hardest working player on the court and during practices. He elevated the play of those around him through his contagious work ethic. Despite being the best player on the planet in the 90’s, he never took a day off. He was always looking for ways to improve and get better, even though he was already great.

“Good is the enemy of great. And that is one of the key reasons why we have so little that becomes great. We don’t have great schools, principally because we have good schools. We don’t have great government, principally because we have good government. Few people attain great lives, in large part because it is just so easy to settle for a good life.”
― James C. Collins

Too often, we are content to be good or just good enough. My high school wrestling coach used to chastise us constantly for being “content to be mediocre”. That has really stuck with me throughout my life. I never want to be mediocre or even “good”. I want to be great. To be great, I must first become good. To become good, I have to work hard, fail as I push my limits, learn from my mistakes, and see my failures not as indictments on my abilities, but rather necessary experiences to push my growth.

To be great, we must be willing to take risks, knowing that when we take these risks, we will occasionally fail. That’s why it is a risk. Are we willing to step outside our comfort zone, be vulnerable, and make those mistakes? If so, we are more likely to improve and get better. If not, we will continue to stagnate, others will surpass us in the long run, and it will be too late.

Embrace failure as a natural and necessary outcome along the road to success. With each failure, try to view it as a learning opportunity, make adjustments, and then try (and likely fail again). Eventually, your persistence will pay off. If you live your whole life this way, you will end up in a much better place than those who consistently played it safe and rested on their past successes instead of sought out ways to continually grow and get better.